Go to content
PATRICIA GAUSS
CRYSTAL
ARTIST OF THE YEAR 2021
Patricia Gauss was named the EMERALD ARTIST OF DECEMBER 2021 and was automatically entered into the first ANNUAL ARTISTS OF THE YEAR EVENT where she was then named the CRYSTAL ARTIST OF THE YEAR 2021.  Meet this enthralling artist, discover her talent for detail which finds a perfect outlet in her charming but unusual subjects and be inspired by her story of perseverance and triumph in spite of surprising discouragement from an unlikely source in the following feature and interview which was created in recognition and celebration of her CRYSTAL ARTIST OF THE YEAR 2021 title.
"I don’t think of myself as “creative;” I think I’m more of a left-brained person. When people comment on my “talent,” I always try to convince them that anyone can learn the skills to draw like this; that’s why I want to become an instructor."
-- PATRICIA GAUSS 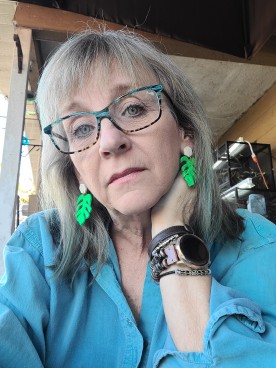 BIOGRAPHY
Patty Gauss is a colored pencil artist in St. Petersburg, Florida, where she has lived for most of her adult life.  She has been interested in art ever since her mother told her she was incapable of drawing a stick figure.  She took a few classes in high school and college, dabbling in an assortment of media but found that she preferred graphite pencils over paint due to their portability and ease of control, however, she lost interest over time because she preferred working in color.  Fast forward about 20 years, she found an instructional book on realism with colored pencils and became instantly hooked!  She hadn’t known that they had become a medium for serious art.  In 1999 and 2000, she had drawings accepted into the CPSA’s Annual Exhibition.  Unfortunately, having been something of a “serial hobbyist” during her life, she drifted off in other directions.  She began drawing again toward the end of 2017 with plans to stick with it.  She would like to become an online instructor in the near future.
EMAIL - INSTAGRAM - FACEBOOK
PRINTS COMING SOON ON THE LINK BELOW!
https://www.etsy.com/shop/awesomelyordinary 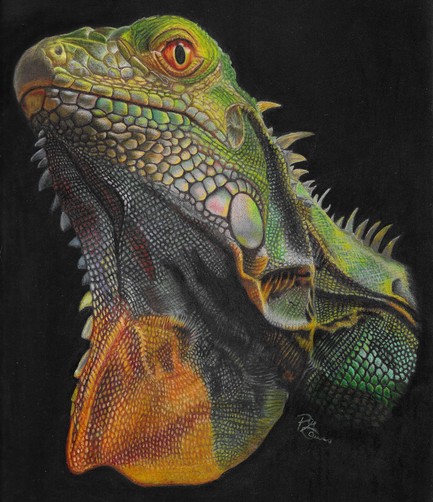 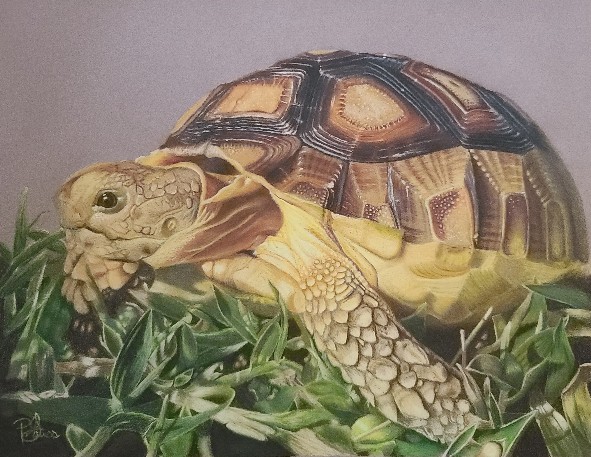 "FASTER THAN YOU THINK"
Coloured pencil
GR- What is it about coloured pencil that is amenable to your artistic approach and goals?  Are you interested in experimenting with other media?
PG- I may as well admit it, I’m kind of lazy.  I love color, but I don’t like the preparation and cleanup of paints.  I also like the control and portability of pencils rather than brushes.  I dabble a bit with pastel pencils but always manage to smear things up, no matter how careful I am!  Having said that, I’ve been loading up on watercolors and supplies for a while but haven’t found the time to really sit down and play around with them.  I’ve seen some amazing realistic work being done with watercolors recently.  I’m also a bit curious about work I’ve seen using ballpoint pens.
I have a lot of dead specimens I’ve collected over the years and I’m learning how to diaphonize them.  I’m still a beginner and I don’t know if you would call it “art” or a “medium” but done correctly, the finished specimen is quite beautiful!  I often describe myself as part MacGyver (I love DIY projects), part mad scientist (rather than “creative”), and diaphonization definitely fits nicely into my mad scientist side!  I’m also planning to learn digital art asap; I have tons of content and a halfway decent tablet.  I guess that would be my priority at this point.
GR- Have you considered exploring other subject matter?  It would be compelling to see your talent for detail applied to the human figure for example.
PG- I actually wanted to do botanical art when I started drawing again in 2017 and I would still love to do some work in that genre.  I like the conventions and scientific exactness associated with botanical art (diagrams showing roots, seeds, flowers, growth habit, etc.).  It would also be a great, maybe even ideal, genre for the watercolors I’m hoarding.  There’s certainly a rich history there to explore!
I would also like to become skilled at human portraits, though not necessarily specializing in them.  I know it’s a fuzzy/gray area, legally speaking but I’ve done a couple of “fan art” drawings and I think that celebrities are a fantastic way to learn portraiture because everyone knows what they are “supposed” to look like.
GR- You state that you wish to become an art instructor.  Would this give you a sense of completion or deeper purpose to your art?  Are you looking to challenge and stretch your skills further or to possibly fulfill a yearning for connection and community?
PG- People compliment me all the time on my “talent.”  Based on my own history, I’m pretty sure that it’s not talent, at least not in a major way.  It’s all skills I’ve learned over the years (and not very consistently), starting with stuff like eggs and drawing boxes using 1 or 2 point perspective.  I would really like to prove that I can teach people how to draw, especially those who don’t think they have the talent! 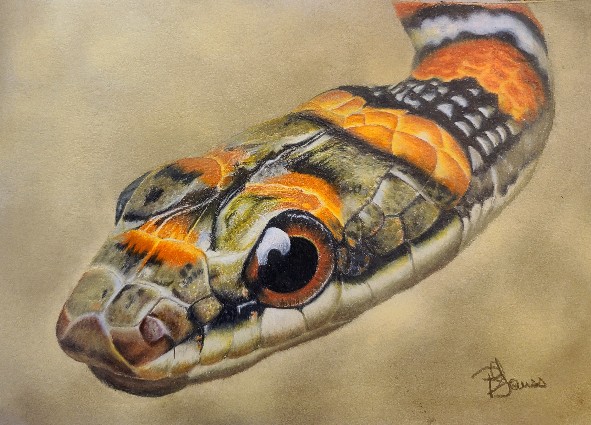 "TWIN BARRED GLIDING SNAKE"
Coloured pencil
reference photo courtesy of Patrick Quek
GR- You state that your talent is merely a skill and that you don't consider yourself creative, which is very surprising and humble.  Are you open to exploring art that is less about realistic description and more about experimental and imaginative compositions or techniques?  Could this be a new area for you to examine, experience and perhaps benefit from?
PG- I feel like I’m a pretty left-brained person and not terribly creative no matter what anyone tells me.  I honestly don’t desire to do abstract or more impressionistic art but I believe that is what the truly creative artists are doing.  I would love to have an opportunity to do realistic illustrations for something (?).  Unfortunately, I think the days of hand-drawn illustrating are mostly over and done with.  As I mentioned above, I intend to learn digital art but it remains to be seen if my “analog” skills will carry over in any way or if I’ll be reduced to poorly drawn stick figures again.
GR- What are you currently working on?  Any new projects you wish to reveal and share?
PG- I have a ton of projects lined up and a few in progress (it can be very difficult for me to complete pieces because my brain is usually thinking about the next one as I get close to finishing). I’m currently doing a fan art piece for my brother’s birthday (2 months late already). If you are old enough to remember the ‘80s girl group, “The Bangles” and their hit “Walk Like an Egyptian,” it’s an iconic shot of Susanna Hoffs from the video.  She is still performing (and looks great). If I can pull it off, he will LOVE it!
I have pictures of shoebill storks from the zoo in Tampa that I really want to do, also a clownfish swimming by an anemone (a “standard” kind of subject, but really great colors!).  I want to draw jumping spiders, tarantulas and I’ve got a great snake photo from a friend that I really want to do.  Also, I’ve only done one portrait of one of our dogs.  There are so many more to do!  So many species!
I’ve been kind of scattered over the past few years, planning to do one thing but then veering off into something else. I’m my own worst enemy when it comes to consistent practice. I think I would be a much better artist if I would do, say, a series of pieces of similar subjects. 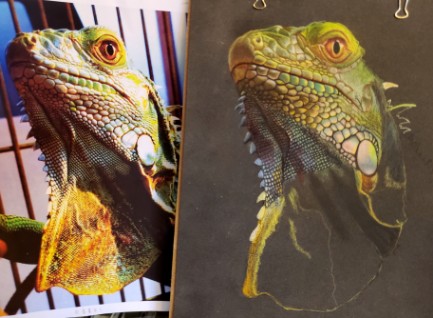 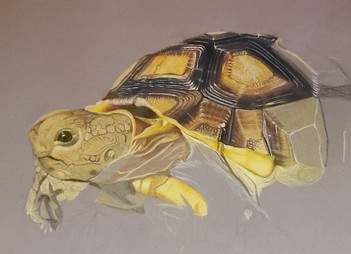 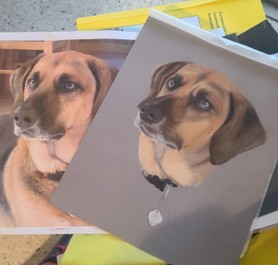 Works in progress
GR- It is fascinating to see your works in progress.  They are reminders that your artworks are not photographs and they serve to emphasize your impressive talent.  What is your process?  Do you begin with a graphite drawing?  Do you follow a system?
PG- Once I’ve found a subject and reference photo, I print out a couple of copies in the size of the piece.  Sometimes I’ll print a b&w version, too, for values.  I then trace down the outlines and major features. I don’t try to trace every little thing, just the details that need to be really precise, like eyes and areas that will serve as a sort of road map for me in keeping things where they belong ( a fold of skin, locations of prominent scales or ear spots).  I always start with the eyes because if I mess that up, it really ruins the piece but it’s no biggie to start over if it’s the first thing I draw. I always have a certain amount of anxiety toward the end of a drawing anyway (I even sign my name before I’m actually done), so I definitely don’t want to be doing eyes last.  Also, the eyes are my favorite part of any subject.
GR- It has been wonderful getting to learn about your art and your handsome, reptilian roommates.  Thank you for sharing your thoughts and congratulations on showing the world -- and your mother -- that your drawing abilities have exceeded the stick figure.
PG- Thanks so much!  Being chosen as your Crystal Artist of the Year is such an honor!  I love your virtual exhibitions and themes. 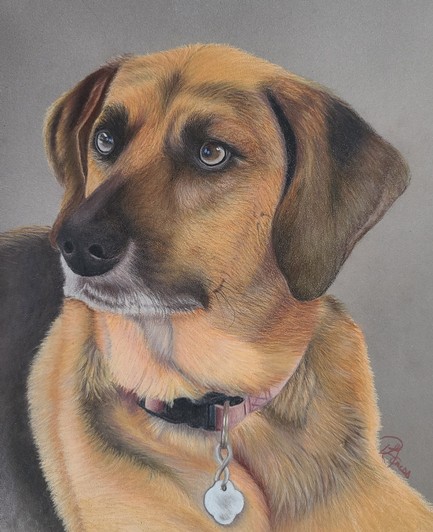 "WHO'S A GOOD BOY?"
Coloured pencil
THANK YOU PATRICIA GAUSS
FOR SHARING YOUR THOUGHTS
HOME PAGE
Back to content